The vertebrae that make up the spinal column are separated by soft discs that stop the vertebrae from rubbing together – a bit like a washer in a tap. The disc has a soft centre and a harder outer crust. Sometimes the outer crust gets torn and the soft centre pushes through, irritating the nerves to the side. Commonly known as “slipped disk”, the medical name for this malfunction is “herniated disk”.
Lifting heavy items or twisting one’s body suddenly can result in a herniated disc, but the cause can be normal wear and tear on the body brought about in the ageing process. Discs tend to lose in time some of the water that keeps them soft and the crust part tears more easily. Overweight people and people who do a lot of physical work are more prone to suffer from a herniated disc, but a tendency for it can also be inherited genetically.

It is possible to experience a herniated disc without experiencing any symptoms.
However, pain in the arms or legs or buttocks can be felt if the herniated disc has occurred in the lower back.
Numbness or a kind of tingling is experienced by some people because of nerves near the disc being affected. These can be mild or worsen steadily, particularly round the inner thighs, backs of legs and area near the rectum.
A weakening of muscles can also be brought about by the nerves affected and can cause a person to stumble or find it difficult to hold items. Bladder and bowel function can be affected.

Once you have been diagnosed with a herniated disc the likely treatments that are going to be prescribed are going to be non-surgical on the whole as is it something that can be dealt with via exercise, physiotherapy and medication. However, if these do not work then surgery will be the final course of action to deal with this condition.

The initial main focus of treatment of a herniated disc is to do with alleviating the pain which of course varies from patient to patient and will be a matter of working out which pain killer is most effective. The most common pain relief that will be prescribed will be either a non-steroidal anti-inflammatory (NSAID) such as naproxen or a COX2 inhibitor. Along with the medicinal pain relief you would be advised to use either a heat pad or cold compress applied to the area of discomfort as this will also lessen the pain.

If the pain is considered too severe for standard anti-inflammatory pain relief to work then steroids or a narcotic based medication could be prescribed or even an epidural injection directly into the area to calm the inflammation. This will allow for exercise or manipulation to take place which is also key to treatment.

Performing a certain set of exercises which alleviate the pressure on your spine and also strengthen the muscles around your spine which has been known to rectify this condition. Therefore, you could be prescribed a set of exercise routines to perform on a daily basis and/or be referred to a physiotherapist to assist and advise you on relevant exercises. Whichever is the case you will need to keep up the sessions for six to eight weeks to gauge if it is reversing the hernia.

After a couple of months, the pain relief and exercise or physiotherapy sessions usually do show improvements in the treatment of a herniated disc and therefore no further action is required however, in some cases surgery will be required.

The most common form of surgery used is known as lumbar decompression surgery and more specifically a minimally invasive procedure called a microdiscectomy which removes the part of the herniated disk which is pressing on the nerve root – causing the pain and therefore gives the nerve root room to recover and heal. It will take a further month or two for the nerve root to fully recover but quite often the pain associated with a herniated disc disappears almost immediately. 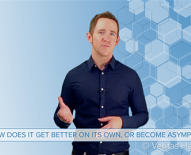 Video: Can Herniated Discs Heal on Their Own?

Has your herniated disc really healed?